Killer Bees, which are also known as Africanized Bees, are a particularly dangerous type of bee that is actually a hybrid of the African honey bee and a type of European honey bee that has been present in Italy for thousands of years. Killer Bees are actually known to be much more aggressive than other types of bee and will actually seek out animals to attack rather than waiting until they feel threatened. There are a number of other theories as to why the bee may be more aggressive. The most commonly accepted theory is that they had to fight for territory much more throughout their history and as a result have naturally become more aggressive with each passing generation of bee.

They were not always present in the western hemisphere, but were at one time accidentally released by a bee keeper in Brazil in the 1950's and have continually climbed throughout South America and made their way through Mexico and into the United States as early as the 1990's. With each passing year they creep farther to the north, but are not expected to be able to survive the colder temperatures of the Northern United States. 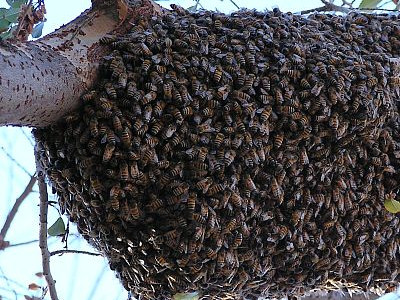 The term killer bee can refer to a number of different species that have become known as aggressive species of bees. Many of the misconceptions that are associated with killer bees (including the fact that they are able to kill human beings) come from movies and from wives tales regarding the aggressiveness of the bees. The only way that killer bees can kill humans is to sting many times. The commonly accepted number of bee stings that it would take to kill a human would be ten stings for every pound. This would mean that a 100 pound person would require at least 1,000 be stings before death becomes imminent.

Although killer bees present a significant problem in many areas of the world, their abilities are often overstated and do not cause as much damage as has been suggested in many movies. Most of the time, they are classified as killer bees because they are a species that is usually much more aggressive, and not because their venom is potentially more deadly or that a single sting from a killer bee is potentially more harmful. While killer bees are more feared by humans, and rightfully so due to their aggressive nature, in reality they are not all that much more dangerous.