How a bee stings

A bee sting is a term that usually refers to stings from a number of different insects that can include a bee, wasp or even a honey bee. Because these stings are often associated with a good amount of pain, many people fear being stung by a bee. Keep in mind that a bee sting is very different from being bitten by other insects, mostly because the venom and poison that is injected into the body can cause different reactions, along with dangerous allergic reactions that can be potentially life threatening.

It is believed that the bee sting developed in bees after a series of inter-colony wars that bees are subjected to as they fight for territory that they attempt to secure for the betterment of the hive and the survival of the queen. Most believe that a bee will die after a sting regardless of the type of animals that it stings. This is not always the case. When bees sting animals like humans and other mammals, their stingers will stick into their thick skin, and rip from their abdomen. This happens because their stingers are barbed, in order to cause more damage. When bees sting bees, other insects or animals without thick skin, often times the stingers will remain intact and will not rip from the abdomen. 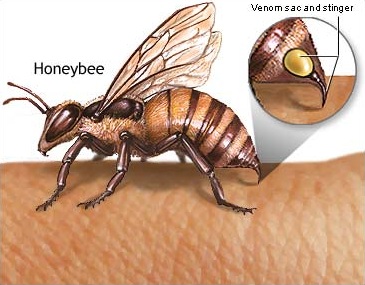 The stinger, which is located on the lower abdomen for easy-stinging access, is violently pushed into whatever the bee is stinging. The poison that is contained in a bees stinger is called melittin, a venom that commonly causes pain in vertebrates. The venom contributes to the level of pain following the bee sting. Honey bee venom is actually used for the long term treatment of arthritis, and in a number of other medical uses.

A typical bee stinger will consist of three different sections. The end of the stinger system is the stylus. In most insects and types of bees the stinger will be joined to two barbed lancets so that it inflicts maximum damage and also will stick in animals with thicker skin, and therefore must be removed or fall out on its own. 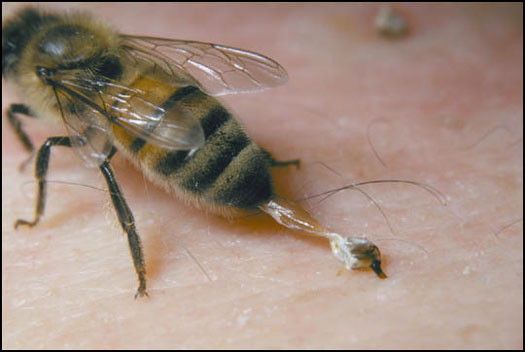 Honey bees typically die after stinging a thick skinned animal because when they attempt to pull the stinger out of the stinging victim, they often rip off part of their abdomen leaving behind intestines, muscles and other parts of the bee itself.

Bee stings are often feared, but more so because a large percentage of the population are allergic to bee stings. While the stings themselves are not pleasant, they are not a big enough deal to create the hysteria that they do in most people. The treatment of bee stings when the individual is not allergic is relatively straightforward and contains a number of different steps that need to be taken to ensure that the sting does not get infected. The most important part of treating any sting is ensuring that you get the stinger out of you as soon as possible.